This Fall 2020, our Passion Into Action is Jacqueline “Jackie” Glass! 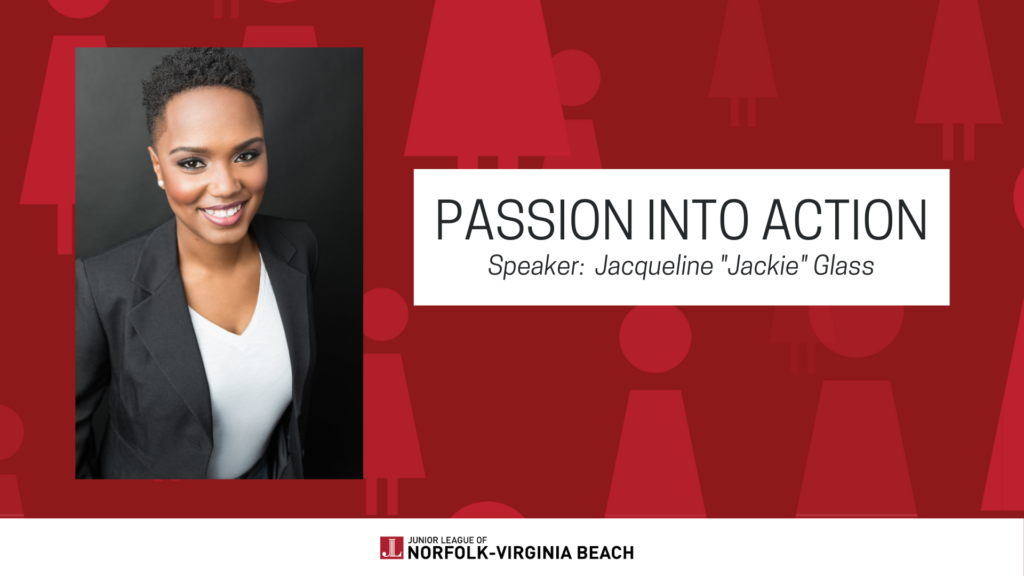 Jackie is a self-proclaimed Certified Doer and Civic Agitator from Chicagoland area who served in the United States Navy for eleven years.

In her role as a cryptologist, she deployed in support of Operation Enduring Freedom as well as Operation Iraqi Freedom. During this time, she served as a Navy Military Training Instructor (NMTI) and a Navy “A” school instructor providing technical training to new Sailors. She was selected as the Course and Curriculum Manager where she led a joint services effort with civilians and the National Security Agency (NSA). She was also a Sexual Assault Victim Advocate and trainer for nine years. After separating from the military, Jackie joined the worked as an Instructional Systems Designer and e-learning developer for the Commander, Navy Installations Command (CNIC) special projects and fleet and family support global contract. She quickly became an asset through her ability to develop creative and inclusive content and usage of agile project management to save time and money.

In 2018, Jackie ran for her cities first fully elected school board and learned by 24 votes. She holds a BS in Workforce Education Training and Development from Southern Illinois University. Jackie occasionally writes for Forbes BrandVoice. She is an Ambassador for the United State of Women (USOW), a VoteRunLead National Trainer and an Association for Talent Development (ATD) National Speaker. Jackie serves her community as the President of the Ballentine Place Civic League and Community Emergency Response Team.

Currently, a social entrepreneur, she is working to improve markets and government policies influenced racism, sexism and classism. Jackie oversees the operations and creative direction of the Your Neighbor’s Hood- a podcast for uncomfortable culture conversation specifically about race, Mamas on the Block (MOB)- a civic action organization for mothering women, The Mayher- a podcast for female mayor changing cities and Head Call- a podcast for women veterans to share their story of service. She is successfully leading the Norfolk 2045 and Just Dinner campaigns influencing a person-by-person change in cross-cultural relationships and affording people the opportunity to confront their bias. She develops strategic methods for transforming parental leadership to an enabler of innovation for economic growth while promoting an in-home “civics first” mentality so that every citizen’s actions support a truly global city.

Jackie is a sneakerhead by marriage and loves to share her kicks via #AIMS (Activism In My Sole). She and her husband and two little citizens call Norfolk, Virginia home.