The Junior League of Norfolk-Virginia Beach, Inc. is pleased to welcome Debbie George, the Chief of Staff for the City of Suffolk as our guest speaker for the April General Membership Meeting. 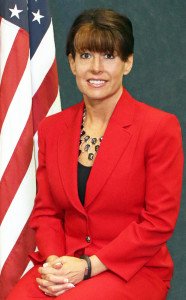 George is a Suffolk native who started her career as a Suffolk police dispatcher. She applied to the police academy as soon as she was eligible and became a sworn officer. After only four years, she was transferred to the detective bureau and five years later was promoted to sergeant, one of the first two women promoted to that role. She served a variety of positions within the police department before working for the city.

Selena Cuffee-Glenn, the city manager who hired George, said, “Debbie excelled and showed herself as a leader in every position she has held because of hard work, talent and a genuine commitment to the city” in a Virginian-Pilot article that features George’s commitment to public service.

As stated on the Suffolk website, the “Chief of Staff promotes and evaluates efficiency, accountability, and responsiveness within City departments and services. This position manages the Health and Human Services portfolio, develops and coordinates the docket and agenda review, and formulates policy for the centralization of complaints and complaint resolution. Additionally, the Chief of Staff oversees the public library system, Department of Media & Community Relations, Information Technology Department, and serves as a liaison between the City ofSuffolk and the Health Department.”

We look forward to hearing more about Debbie George’s experience in leadership at the GMM!

The Junior League of Norfolk-Virginia Beach, Inc. is an organization of women committed to promoting voluntarism, developing the potential of women, and improving our community through the effective action and leadership of trained volunteers.